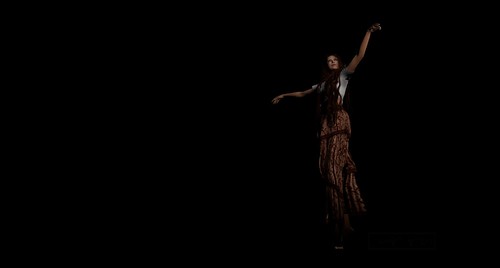 Where the fun is

Taking photos in SL is both easier and more difficult than real-life photography.

It's easier because I don't have to leave the comfort of my home.  I can manipulate the ambient lighting, the color of the sky, the time of day, the angle of the sun, the clarity of the water, the cloudiness, etc, all very easily without additional cost.  I can freeze the waves, the clouds, even the wind.  I don't have to coordinate schedules with a model.

It is more difficult because we are limited by what's available to us, like poses and facial expressions and avatar components.  It's not as easy to "strike a pose" as in the real world, especially if you have a specific pose in mind, because that animation has to be created.

The interesting thing about Second Life photography is that each photo is really the sum of the creativity of several people, not just the photographer.  Everything that is in the photo was consciously created by someone.  For example, the skin, the hair, the eyes, the jewelry, the shoes and the clothing are all created by other people.  Not to mention the engineers who programmed the software to render the avatar and the shadows and generally to "create" the space for this to be possible.

But the reason I focus on Second Life stereoscopy is because there are very few of us who do this.  Probably only four of us.  It's a wide open niche and there's so much that hasn't been tried yet.  It's the same with the stereo framing -- not many people do it.  So, there's lots of room for innovation.

I promised it in Flickr eleven months ago.  Sascha Becher reminded me last month.  It took me a couple of weeks or so to get it done.  But the "Stereo Framing" series of vidtuts is all done!  You can also view it directly in YouTube.

Whew! This was a bit of a challenge, but well worth the effort.

First, I've never done video tutorials before, so there was a lot of technical research that I had to do, as well as best practices research on teaching using videos.

Thankfully, and perhaps synchronistically, TechSmith.com offered a 30-day free trial of Camtasia Studio 7.  I had tried CamStudio, but it was very limited and the frame rate wasn't fast enough so that the mouse was jumping around.  I may end up buying a license for Camtasia so I can continue doing vidtuts in the future, but I'll have to figure out finances first.

I think $300 is too much for Camtasia, when Sony Vegas sells for 1/10th that price and has pretty much the same video editing functionality except for the screen capture.  I think Sony Vegas even has more features. But I'm not familiar enough with either product to make a reliable comparison.

Besides, Camtasia is missing some basic functionality, like the ability to select multiple objects in the timeline to be able to move/copy them at the same time to another location, or the ability to define custom callouts.  The set of callouts is very limited.  I would also like to be able to "unhide" the parts of the raw videos that I "deleted" in case I change my mind long after an Undo is no longer feasible.  I guess I'm comparing it to hiding columns in Excel.

I'm going to try Fraps next time, since I've already tried Fraps with the machinima ad I made for Mer Betta.

Anyway, now I can add video tutorials to my list of things I know how to make.  *grins*

Second, I got a chance to explore the other features of Stereomasken that I've never really played with before.

Third, I got a chance to get to know Bernd Paksa, who created Stereomasken.  Our communications have been all by email.  He writes in German, I write in English, and Google translates.  :D  He's telling me tips and tricks and he has more, so I think it's better to just create a new series instead of cramming them all in this seies.

Fourth, I've also fleshed out the website as I've worked on the vidtuts, so things are more organized.

I read somewhere that the Mayas (yes, the same ones who ran out of rope for their calendar) had a peculiar sense of beauty. They believed that flat foreheads and crossed eyes are symbols of beauty, so they would tie flat boards around their babies' foreheads to flatten their skulls and hang a bead between their eyes to make them cross-eyed.

Well, if you're able to read this blog, you're already too hard-headed to flatten your skull. But you can still be instantly beautiful if you cross your eyes. And you can view stereo photo pairs while you're at it. *grins*

I discovered stereoscopy in Flickr while doing a search for "3D", actually hoping to find photos from other virtual worlds besides Second Life®. I didn't find what I was looking for.  Instead, I stumbled upon Sascha Becher's stream, particularly this photo. And I've been hooked since.

After doing a lot of research on stereoscopy and creating stereo images, I created my first stereo pair, which was also my holiday greetings card for 2009, and I received many encouraging comments about it and subsequent works.

Through one of Sascha's notes, I discovered Stereomasken by Bernd Paksa, and a whole new creative world opened for me. I had so much fun with stereo framing and I still do. After a few prods from Sascha for a video tutorial on Stereomasken during a span of ten months, I finally found the time to start creating them. And you'll find them in YouTube and in my website.

I used to document my process in Flickr as well, but it is difficult to find that information there, so I'm slowly transferring them to the Cross-Eyed Beauties website.

Meanwhile, I hope to create short clips and such about my process in this blog as I create more stereo works. And then I'll compress them into tutorials in the main website.